Our staff is comprised of dedicated and licensed professionals with the experience to answer all your questions regarding our services. Please feel free to contact any of our staff members at any time.

Jack is a licensed funeral director and has been a member of the Seamon-Wilsey Funeral Home, Inc. since 1979.   A Graduate of Saugerties High School, Jack continued his education at the State University of New York at Canton earning a degree in Mortuary Science.   He completed his residency requirement at the Gray Funeral Home in Port Jervis, NY before returning to Saugerties to join his father, Harold M. Wilsey in the operation of Seamon-Wilsey Funeral Home.

Active in the community, he is a life member and past president of the Saugerties Kiwanis Club, a member and Past Exalted Ruler of the Saugerties Elks Lodge,  a member of the Saugerties Blue Kats Men's Club and the SAA Golf League.   Professionally, Jack is a member of the NYS Funeral Directors Association and a Past President and member of the Dutchess, Putnam and Ulster Funeral Directors Association.  A lifetime parishioner and lector at St. Mary of the Snow RC Church, Jack also serves on the Board of the Rip Van Winkle Boy Scouts of America and Sawyer Savings Bank.   He and his wife, Juanita have two children, Eric and Karin. In his spare time he enjoys boating and golfing with family and friends.

Eric is a licensed funeral director and has been a member of the Seamon-Wilsey Funeral Home Inc. since 2002. Growing up in Saugerties he graduated Saugerties High School with the class of 2003. Eric became interested in Funeral Service by noticing the number of families that had a strong appreciation for the services his family provided, and it quickly became something that he wanted to be a part of.

Eric then enrolled in the State University of New York at Canton. At Canton he earned the Chancellor's Award for Student Excellence. After completion of the Mortuary Science major and Graduation, Eric planned to further his education in 2005 at Oneonta State University. There he studied and completed a Business Economics Major and played two years with the Oneonta State Baseball Team. Graduating with a Bachelor's Degree in 2007, Eric took the summer to complete the necessary requirements and in 2008 became a Licensed Funeral Director.

In 2013 he was chosen to attend Meet the Mentor's weekend at Emory College in Atlanta, GA. a nationwide educational conference for aspiring young funeral directors under the age of 40. Eric is currently a member of the New York State and National Funeral Director's Association, parishioner of St. Mary of Snow Church and Saugerties American Legion Sports Committee.

Eric still enjoys athletics whether on the field, court, ice or course. Actively playing adult baseball, golf and ice hockey in local leagues. Eric married Ashley in October 2016 and welcomed a new generation to the family with the birth of their son, Cayden Michael Wilsey on New Year's Eve 2017 and daughter, Avery Joan Wilsey on May 20, 2019. 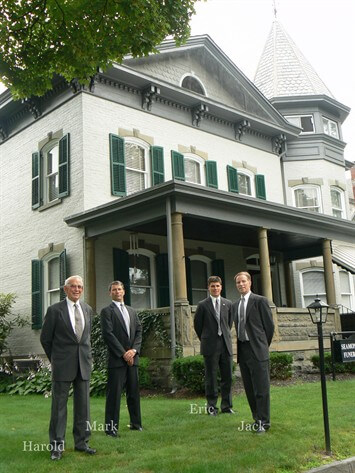